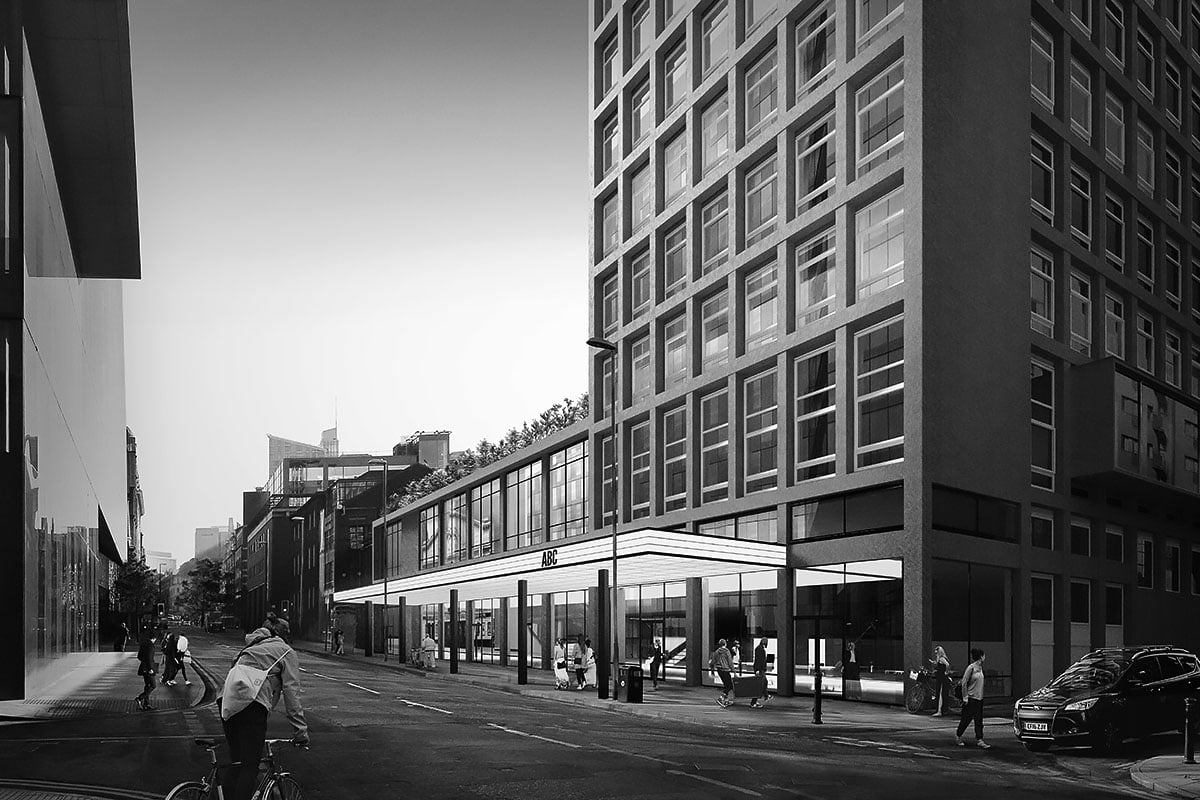 The former Astley and Byrom house building is to be re-adapted, refurbished and re-named as ABC. This cluster of three buildings will form an integral part of the Enterprise City community at St. John’s and are being focused at Film, TV, Media and Tech companies seeking a presence in Manchester city centre.

This collection of sixties buildings has been empty for nearly 10 years and were earmarked for demolition by the former owners, to be replaced with a single large office building. The architecture and design; it’s true sixties. The ABC buildings have many fine features from an era of innovation and originality, and many of which remain as relevant today as they were over 50 years ago.

Allied London will readapt the ABC buildings with architects Levitt Bernstein to enhance the original 1960’s architectural features, with the completed project being fully incorporated into the St. John’s development off Quay Street, as an early phase of Enterprise City.

“Diversity is at the heart of our Enterprise city brand and it’s driving a tech, media and creative agenda at St Johns that includes a wide range of commercial uses, especially those around TV and Film making.

The ABC Buildings once restored to their 60’s ethos and enhanced with an advanced tech infrastructure, will make powerful additions to our Enterprise City vision”.

Allied London have already started construction and will launch the ABC buildings complex in late summer, with key anchor tenants taking workspace at that time.

Michael Ingall, Chief Executive at Allied London, revealed plans for a new concept building, designed with architects Child Graddon Lewis, at the Manchester at MIPIM stand during this week’s conference in Cannes.

“It’s MIPIM week as you would expect allied London with the help of CGL has revealed a new idea – a concept building referred to as Enterprise City campus, a 500k sq ft integrated series of buildings that could be a new tech and media campus for Manchester.

At this stage it’s only a concept but could lead to a significant extension of Enterprise City – it’s the difference between 10 and 15 thousand workers. The building if developed would be an extension of Enterprise city and be adjacent to the new Factory arts centre, and replace a part of the Trinity Islands development, deliberately designed for modern Industry and have a real purpose focussed on inward investment for enterprising business’s”

“Imagine waking up in the morning and looking out over stunning views of Manchester from your Trinity Islands apartment, going down to the gym, picking up your coffee to then walk along the river bank, into one of the most exciting and well-connected workspaces in the City.

The addition of Enterprise City Campus, to what is already one of the most forward-thinking regeneration schemes in the UK, creates another brilliant opportunity for Manchester and its residents. CGL is thrilled to be a part of it and this is made even more significant due to its location just next door to Trinity Islands.”

Enterprise City is a place for modern industry in Manchester. It’s a community made up of the tech, digital and creative industries, based at the heart of the St. John’s neighbourhood.

Child Graddon Lewis (CGL) is an architectural and design practice located in Spitalfields, East London (HQ), Leeds and Manchester. Established in 1992, the practice has grown into a 50+ team of talented architects and designers.

Levitt Bernstein is a practice of architects, urban designers and landscape architects with over 120 staff working from design studios in London and Manchester. We believe that good design can transform lives and apply this principle to our housing, education, health, arts and commercial projects of all shapes and sizes across the country.

St. John’s is Manchester’s new neighbourhood for culture, living and enterprise. Allied London will develop the former Granada TV studios site which embodies the Spirit of an Era; retaining the studios and bringing them back online with All Studios. St. John’s will also be home to the Factory arts centre, a gaming changing facility for Manchester.

All Studios took over the management of the Old Granada Studios in 2017. Since then the company has seen a significant demand and experienced success in attracting the likes of Peaky Blinders, Snatch and Wanderlust to its city centre facilities at St. John’s. All Studios will continue to develop its studio and TV/Film offering at ABC and across the Enterprise City portfolio.

Manchester has a digital employment of over 50,000 people / Ranked in the top 10 in Europe for transport connectivity / One of the largest student population in Europe, educating over 400,00 students per year / UK’s third largest airport which is undergoing a £1 billion expansion.